Can you tell us something about yourself?

Eek! This is where shy Me takes over and I’m rendered wordless. Not sure. I’m a drumming ex-Chef turned self-taught web/gui/SL chickypoo who is, I’m sure,  prematurely bald from trying to learn all there is to learn both in SL, graphics and else.

How long have you been an SL resident? Why did you join?

How did you start making jewelries/accessories in SL?

I think it’s a long history of preferring anything that required more than a measure of intricacy, accuracy. Not sure what this is. This is why games like pool and billiards appeal to me, as well. Darts. Things that others might see and say, “Whoa” to. As a kid I made a toothpick house. Glued, cut-to-whatever-was-needed-sizes, sized, scaled and so forth. I was young, and all I recall, making it, was just wanting to make anyone who saw it say “Holy.. I couldn’t do that.” or “I sure don’t have the patience for that.” I liked that feeling, though not sure why. If I am lucky, sometime, someone might think that of something I’ve made.

Why did you choose the name “Amorous” for your store?

Not sure I recall — though I know sometimes a logo comes to my mind before the actual words/test. I saw a shape. A rounded rectangle, with some text out one side. I just wanted the sort-of word “Amor” to be used. Somehow. Some way. And, actually, Amorous was intended as a club, first, but later transitioned into what it is now.

Do you have any inspiration when creating your accessories?

Life, I suppose. Sometimes it’s directly a photo of a necklace, other times something wholly unreleated. I made a necklace, once, after glancing at someone’s muffler on their vehicle downtown. o.O

Apart from yourself, which jewelry creator do you admire?

Earthstones. Second-to-none in what seems to be her almost intrinsic understanding of color, what works, and why. Her graphic design skills, overall, are sharp as well. Mandala also comes to mind. I feel equal parts inspired, and defeated, looking at his items. Hate and love the guy.

What was you first creation?

A two-tiered necklace choker thing. I’m all on the up-and-up with technical terms. Try not to get lost. >.<

It was god-awful. It was also the first item I’d scripted, though using scripts purchased through another (Socool Destiny). I think I still have it, kicking around on an Alt. Want a photo? (Ack! Bad idea.)

Which one of your creations are you most proud of?

It’s not one you see, wear as an attachment or can listen to. I’m not keen on much I’ve made, but that I seem to have a steadfast, loyal following (of sorts!) is, to me, my best accomplishment. Humbling.

Not currently, no. Most of the ones I have I found myself. I guess I just go to bloggers myself when needed.

Have you had any “awkward” encounter with a blogger? How did you react?

I think it was something along the lines of:
“omg i luv ur stuff ive bot like, ur whole store i can b ur blogger?”

And then a quick check of her past purchases. None.

And then the awkward “Don’t know how to tell you how awkward I feel” awkwardness that followed.

I think I sent her some items anyhow, but didn’t add to any in-world blogger group or anything, though I admired that she, at least, tried.

Thanks for your time, Miss Monday! More power to you and your store.  ❤

Stay updated with everything Amorous!

← An Incentive: Commenting on Others Blogs – Inspiration for Us All!
Freshman Blogger: Shiloh Selene → 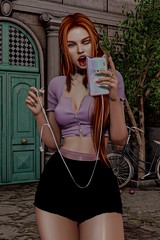