In an effort for all of us to get to know each other better, I’ve decided to conduct some friendly (and not at all prying) questionnaires. I hope it’ll help connect us to others, and bring our little community closer. Today, we have Anke Hatchuk.

What’s your SL name and what do people call you? Anke Hatchuk.
Mostly everyone I know in RL also once knew me as Anke! Several of them still call me that, and everyone online calls me that.
A select few people who have met me in RL use my RL name, but that actually isn’t super common.

Do you have any SL family or RL family in SL? No SL family, I’ve not really ever done that… Well, once, but that is an odd story.

Otherwise, just my RL family… Funny story that, my husband actually had an SL account from 08/14/2007 that I found out about only around when we started dating in RL (after being long time friends!)… Which was in around 2010~

Otherwise, I think my MIL & BIL both have SL accounts but no one is active here except me.

How old are you and where do you live? I’m 22 and I currently reside in Nebraska US, which is like dead center of the country in RL, and on my two homesteads in SL – Sanguine & Dysfunctionality.

What’s your home life like? I have a small 2 bedroom apartment on the third floor with a really nice little balcony, we don’t have a TV or a couch set or anything, just desks and computers in our living room. I love my livingroom because I have this huge window that looks out into the park we live next to, and there is a row of tall maples right outside that are turning the most gorgeous shade of red right now! ❤
Our 2nd bedroom is totally barren because a friend is moving in next month.
I have two gray kitties who totally dominate my life, one of them is a mere 3.5 pounds and is a dwarf and the other is 25 pounds and is huge.
I was married last year on my birthday to a nerd, and I finally have a better computer than him. He works retail, and I work in SL now.

Why did you join SL? I was playing a game called Project Entropia at the time, and there was an exodus of people from there to SL, and although I was too young to get an account, a friend who was also too young used his mothers Paypal info to get us both our own.

I joined for entertainment/boredom, I was a really lonely kid and never had any friends. Punishment from whichever relative I was with at the time was typically to send me outside, away from the computer lol… SL became a really good outlet for me to socialise comfortably without the competitive and malicious twinges a lot of other online games or chat places had.

I didn’t ‘stick’ at first, but in June 2006 I really began to stay with it, and I’ve had several accounts since then. I blame a really fun and social… sexclub named Celestia that I hung out at. I never did anything sexy, though.

What do you do in SL? I currently co-own and operate a brand called Dysfunctional Designs with my ex codered1200 Nemeth who mainly does scripting, and Kalia Firelyte who is a friend I met last year who now does mostly all the models and texturing. We tend to stick with Home & Garden of a more rustic nature, but we aren’t tying ourselves down to that.

At this point, I just loiter around on my work platform and gather ideas/sources of inspiration for Kalia, and compile the less than user friendly scripts from code with Kalia’s models, add in finishing touches from other sources like animations, and perm/sell/market our combined wares. We all make a portion of the proceeds.

When and how did you start? Well, it was around late 2006 that I began hanging around in sandboxes, furry ones actually, and met a lot of really interesting people. Two of them who were really instrumental in teaching me the fundamentals of SL building went by the name of Zeal Zenith and the other was Uchi Desmoulins, aka minty bunny.

I didn’t stick around too long because I began exploring & meeting other people, as well as picking up my first foray into SL Gor. After that I ended up in a tribal RP setting and they polled the entire group trying to find anyone who could even slightly build and then more or less coerced me into building their ‘camp’.

I decided to sell some of the things I made in a little skybox that a friend from the Hyperborea sandbox/educational sim let me set on his land. I quickly outgrew that and while moderating the Aquatic Sandbox sim I met a gentleman named codered1200 Nemeth who let me use his sim, Sanguine, for a slightly bigger store.

I switched over to Anke in 2012 after closing the store for a year, and well… Here we are today!

When not working in SL, what are you doing? Playing & taking care of my cats, reading a book, cooking (I love food), or hanging out with my husband & his really awesome family.

Who is the most fun/interesting person you’ve worked with?  That is really impossible to answer, but from awesome people I met on my first day in SL like harpo Jedburgh, to long time friends such as CaptnPower Codesmith, to code & Kalia… I don’t think I have worked with a bad soul. These are some of the most memorable.

Who do you want to work with? I would really love to collaborate with talented pose/animation makers for some original works, or other amazing creators in events like the Neighborhood which brings customers to our stores while keeping a reputable name.

What do you wish you could do in SL? I honestly wish I could be more social and friendly without feeling awkward anymore. I really got soul-sucked into my store, and now I just can’t do anything else without feeling like I am compromising it somehow.

Otherwise, I wish I was able to motivate myself to work in Maya more. I am really nothing compared to Kalia or other creators works.

What is your favourite creation? This bed that we recently came out with

The reason is that it is the perfect culmination of our store, Kalia’s talented meshwork, code’s scripts that are getting better by the week, and my hard work in getting it all compiled together.

It may not be our top seller or anything, but for me it is my proudest and favorite just because of the landmark it sets in the stores history, and in general my history in SL.

What is your one SL vice or guilty pleasure? I run around in panties or simplistic cozy outfits all day. I have a legitimate reason – panties are easier to adjust poses in since you can see the avatar. Totally legit. Don’t question my panties.

I also have probably more panties than I do any other type of clothes, I own maybe 4-5 shoes, no jeans, a couple pants, skirts, and dresses… But lingerie and panties in general? Oh yeah.

What is the oldest thing (you can find) in your inventory? On this avatar? Only actually back to July 2010 with a giant Snorlax plushie my ex codered1200 made me. I tend to keep my inventory pruned, but I can’t delete that!

… I refuse to open the inventory of my older avatars. I keep this one pruned for a reason. Don’t put me through that torture please. ;-;

If you had to describe yourself in three words, what would they be? Kindheartedly sleepy panda? I actually have no clue. Maybe shy workaholic pervert.

Does SL influence your RL style? Vise versa? Oh definitely. I think I have come to a pretty good equilibrium between the two now… Anke can wear some things I just couldn’t find for RL me, so that is the only big difference.

What’s your favourite pasttime? In SL? Jumping on one of my SL beds while bantering with Kalia or code.
In RL, it is reading books. I am very fast at reading and just go through them so quickly.

Anything else you want to share? Oh, is this like at the awards ceremonies? Well I’d like to thank my codesigners for their endless support and patience, all of my friends that I almost never talk to because I get so preoccupied, and people in SL in general, especially my customers for making all of this possible!

…Oh and I am really sorry to everyone who had to suffer through my hugely long responses. I am so sorry. I get carried away.

Category: iheartslfeed, Interviews Along the Grid, Second Life: Our World 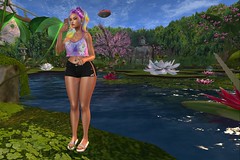