I really had no idea what to call this idea of mine.  I’m sorry, it’s corny.  If I think of a good name, I’ll change it up.  My basic idea is to focus on people in Second Life that go out of their way to do amazing things for others.  Being that I am hermit lady, hopefully there will be some suggestions along the way and stories to share about amazing people out on the grid that I can stalk and photograph. While thinking about who I wanted to highlight first, it… Read More

A few months ago I was in Plurk talking with a bunch of other bloggers and designers about blogging and the lot. Of course many ideas were tossed around, but one of them was something that Magenta DeVinna brought up that stuck with me because I had felt it as well: There was a loss of inspiration. Where was it? What had happened to blogging, except it becoming this monotinous movement of post after post of just…items? What happened to the feeling within the blog? Finally, someone (I believe it was Prad)… Read More 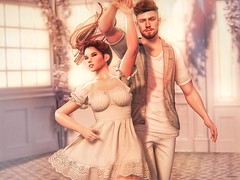